This little design created a lot of interest at Dev8D software development conference this year. E-beam gestural drawing software was used as a visual addition to a bespoke laser harp that acts as a MIDI device. The E-beam whiteboard software translates the movements of the pen to an onscreen canvas while interrupting the path of a number of laser beams which in turn controls a synthesiser in Abelton Live. The system makes use of the Arduino environment, bespoke electronics and hacked MIDI data cables.

Essay:
This document was written as an exploratory study into art authenticity in virtual spaces. It questions the network as a creative space and begins to highlight some of the potential issues that are prevailent with it as a collaborative environment. Aspects of credibility, distance (telepresence dynamics), and an ability to be truly interactive are discussed.
Media Link:
Art Authenticity and Identity: Blast Theory's CYSMN, a case study
L.
Posted by Lee Scott at 08:28 No comments:

VIVID presentation: The Afternoon Of A Faun 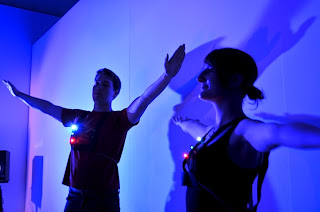 Performance at VIVID Gallery, Birmingham
Conceptualisation:
This work was designed to investigate the growing dependancy on electronics/technology in modern live performance. Is content as important as spectacle when presenting a piece of theatre? On the flip side, i wanted to try and engage with some traditional theatre conventions and see how an audience would react to sudden changes in concept (four walled scenario, to immersive), and emphasis (on the performer then on the technology).
Please refer to the Video below for a rehearsal recording with contextual voice-over
The Afternoon Of A Faun: VIVID gallery, rehearsal
Technology:
Communication between lighting was achieved using Midi between MaxMSP, Logic Pro and some scripting i wrote for the Arduino IDE. The light suits were build using wide angle high output LEDs. The work was fully automated and required only an initial start trigger by a wireless device. 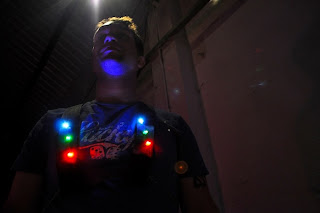 Concept:
The work was part of the 'Changing Rooms' Project, hosted by EastSide Projects, Digbeth. Six resident artists each consecutively created a one week online installation designed to challenge the transitionary nature of Virtual shared environments. In this case the space was hosted by Second Life.
The creative space was occupied with 128 'primitive objects' that could be transformed in dimension and aesthetic to build a digital artwork.
more information: Changing Rooms project link
My work:
I treated the project as a statement of my regard towards online collaborative practice and the creativity that could be achieved when working in a virtual environment.
My work exploited the loopholes of Second Life and the restraints of the project to create a virtual prison that once entered, could not be escaped. The first parallel was not an artistic one, it expressed concern toward the people who felt they would find salvation in life 2.0. In fact the only way to escape the maze, was to turn Second Life off.
To address issues of ownership, i scripted a non delete function into the primitive objects so that the maze could not be manipulated in anyway. In addition i moved the entire virtual space (a recreation of Eastside Gallery) several pixels upward so most of the static primitives could not be selected. Finally i placed triggered sound objects in such a way that you could not turn off the in-game sound once it had started.
My work was referenced in at The EVA conference in July 2010 as the author felt it was a bold representation of the dynamics of todays online collaboration practice in virtual spaces.
Sporton, G (2010) 'Creative Identity Theft: Issues for Artists in Collaborative Online Environment' paper presented at Electronic Visualisation and the Arts: London, 6th July 2010.
Work Example:
Please follow the following link.... Second Life - Permission to Land General Linden
L.
Posted by Lee Scott at 06:52 No comments:

The Watertower: Selly Oak Emergency Entrance.
Video:
The following video details the contextualisation behind the VRU Watertower project commissioned by UHB hospitals (Selly Oak and Queen Elizabeth)
The work was part of their 'Take a trip down memory Lane' celebration of Selly Oak Hospital history. The whole experience was designed to help staff, patients, and the public to reflect upon their memories of the hospital, however it was also a chance to look forward to the future, and the benefits that the new Queen Elizabeth hospital would bring.
Myself and Iona Makiola (twitter link) used the UHB histories archive alongside actual aural accounts to produce a narrative rich experience which walks you through over 200 years of Selly Oak history.
The Watertower: UHB presentation video
Technology:
The work used the Half-Life 2 games engine as a tool to create a virtual environment. 3DStudio Max and bespoke pieces of software were used to compile and texture purpose build 3D models designed to tell stories of the environment they were placed in.
Varies soundscapes and aural history fragments were triggered throughout the experience, however to add value we also used live sound audio components. These were cued and placed in a surround sound situation using Max/MSP. From here it was possible to manipulate their spatial position, playback speed, and add specific effects.
more info: http://leescottma.blogspot.com/
Watertower project: Selly Oak Hospital presentation
L.
Posted by Lee Scott at 16:55 No comments: